When wanting to do something fun outdoors people tend to seek the reassurance of organisation and use some kind of business to provide their adventure… companies named something like GoKayaking, or RockClimbing4U. This then usually requires some kind of boring booking process and then lots of money. As a result the best feature of outdoor activity is removed- simplicity. Over time people lose the incentive.

Hiking is the way to avoid this, a way of having an unorganised adventure where you can just pack your bags and go, the way I believe it should be. I first realised this after walking the Offa’s Dyke path a few years ago. I was a beer fattened undergraduate student, with little money and not enough time to go overseas and made a last minute decision to go on a bit of a jolly.
It turned out to be a great way of getting outdoors and having fun- this is for the three reasons that I will highlight in this blog post. 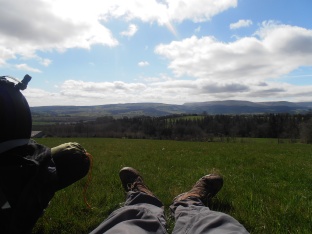 Offa’s WHAT?
The Offa’s Dyke Path is a long distance trail that follows an ancient earthwork fortification along the Wales/England border. One end is in the south at Chepstow and the other in the north at Prestatyn, with 186 miles of breathtaking countryside in between.
Firstly, going about the walk is simple. It doesn’t require the best laid plans. Having been given national trail status in 1971 the path has been defined by many walkers through the years and has been affectionately maintained by a dedicated bunch. Get yourself to one end and the acorn markers will get you to the other. No need to worry about compass bearings or which one is the North Star.
Along with the easy navigation that comes with a National Trail, its long term trail status has meant that places of accommodation have had time to cluster around it. There are many bed and breakfasts that have sprung up along the route but as I always stress the best way is to rough it and there are many campsites to allow this. Some of these are specifically for those walking the dyke, these are basic, cheap and fun and are not advertised on the net with the intention of keeping them low key.
So if you want to camp along the dyke make sure you stay in these rather interesting walkers only sites.

Panpwnton Farm in Knighton- On arriving, there is no evidence of this place being a campsite, however if you knock on the farm house door you will be escorted round the back into a field where you will have to carefully pitch your tent in a space between sheep droppings. Has a lovely shower alongside the cattle shed.

Heath Cottage in Kingswood- A Bed and Breakfast though the eccentric owner allows walkers to pitch on a space of grass next to her vegetable patch. Worth staying just for her tea- she brought me a full tray, complete with knitted tea cosy.

The Golden Lion in Four Crosses- The landlord of this odd pub lets walkers pitch up in the pub’s beer garden. Immaculate piece of grass that is sheltered by the wind and has a good shower…a good place to rest with a few beers for the evening before walking to ‘Worlds End’ the next day.

Village Hall in Llandegla- Look on the noticeboard of the hall and you will see a contact number for those wanting to stay in the village before heading up into the Clwydian Mountains. You can pitch up on the football pitch behind the hall and have a shower inside.

Alongside the simplicity of taking on the path, the second allure of Offa’s Dyke for unorganised adventurers is its length. The Wales Coast Path or the Camino de Santiago, two walks I have undertaken in the past, both take more than a month to complete. For those who want a long distance walk, this amount of time off work is unfathomable. Offa’s Dyke is a lot more manageable, with most being able to complete it within two weeks, but it will still make you feel like you have been on a proper hike and not just a simple stroll- something to be proud of.
Whilst some fitter people might be able to complete it within 11 days, set yourself two weeks so you can walk at a pace that suits you whilst being able to appreciate the sights along the way, these to me are the third and most attractive part of Offa’s Dyke as a long distance walk.

The path over the Black Mountains

You are well and truly in the wilderness for most of the journey and as a consequence, whilst the walking is quite challenging, you will see nature at its best.

There are the Black Mountains in the south where after rising up a steep climb above the clouds you then walk along the spine of a mountain for miles guided through the bog land by stepping stones in the black mud. Then in the north, the Clwydian range where each climb gets higher and higher but the views over the patchwork fields of the vale below grander and grander.
Between these mountains there is not much rest, with the Shropshire hills to bounce over. There, with every steep climb from a quaint valley, you must then surrender your height and return back down. Though, for your struggle with the Welsh hills, you are rewarded with beauty and isolation. Each day to rest your weary feet you will find a little market town pushed between the hills. You will wonder how on earth they came to being in such places, towns such as Knighton, Kington, Hay on Wye and Montgomery, with old high streets lined by butchers, grocers and inns and where you could imagine the daily news still arrives a day late.

My favourite section from both times I have journeyed along the trail is the Wye Valley. The river gently ebbs between the steep wooded banks and several old bridges swing you back and forth between Wales and England. It is of course the ‘riverside of romantics’, where Wordsworth penned his ‘Lines Composed a Few Miles above Tintern Abbey’, inspired by the valley and the ruins of the great relic wrapped around by the river.

But it is not just in the Wye Valley where you can see Wales’ past. The Welsh border in its entirety is a history filled land. There are the castles that guard the Welsh marches; Chepstow, Chirk, White Castle and Castell Dinas Bran- only the highlights of the many castles to see along the way. Then you will pass the land of Telford, with the spectacular Pontcysyllte aqueduct and the canal crossed country he shaped around Welshpool.
The National Trail itself follows for almost the whole 186 miles alongside a hugely important piece of Welsh history. The earth wall that runs the whole of the border was built by Offa, the Saxon King of Mercia, who wanted to control the unruly Welsh who would descend from the hillsides to terrorise his people. Although time has swallowed large portions of his dyke, in places it is remarkably pronounced from the landscape, particularly in the area around Montgomery and through the Shropshire Hills where the piled earth can be some 3 meters in height.

Finally, as readers of my blog will have gathered, my walk around Wales became a somewhat pub tour and Offa’s Dyke provides some of the best of them.
There are the numerous pubs in the Wye Valley where you can sip a cider on the water’s edge whilst watching kayaks pass down the river. Then you must visit the Skirrid Inn in Pandy near Abergavenny; the oldest pub in Wales (possibly Britain) and one of the most haunted! The dyke itself even runs through a brewery which has named itself after it, so make sure to stop there in Trefonen. You might be as lucky as me to get a tour by the proud owner.

So if you are one of the many people who do not engage in outdoor activity because you think it is inaccessible, i hope i have enlightened you. What I hope I have demonstrated is that hiking is the most accessible adventure you can have and the Offa’s Dyke Path offers the perfect way to get started. Simple to plan, won’t require too much time away and most importantly you will see the most incredible places.
So if you are a bit strapped for cash and time but want to get outdoors and into the wild on an adventure, bear this advice and these places in mind and book yourself two weeks off work, grab a tent and head to Prestatyn or Chepstow to begin your own expedition.