Two weeks ago I returned from my journey around Wales. I wandered alone, 1,034 miles around the perimeter of my home country for 9 weeks, carrying all I needed to live on my back. I experienced ultimate freedom and adventure, though  was never more than half a day’s drive from home.

What I want to demonstrate is how easy it is for someone to have such an experience; how surprisingly simple it can be. Admittedly, I was lucky enough to have an important factor in that I had unlimited time but read on and I will show you how, even if you only have less than a week, with the path around Wales you can have a taste of real adventure.

I’m one of those graduates who stumbled, penniless and directionless out of university. Needing to go somewhere that I could do some deep soul searching but not wanting to spend the money flying out to hang with Tibetan monks, the Wales Coast Path was ideal- it near enough runs past my house.
The way I envisioned leaving would be to suddenly pack up my bag, inform my parents I was off and walk out the door, but I was constrained by a lack of gear, the money to buy it and sustain myself, and also the weather. So I got a job pulling pints and desperately waited for winter to pass.
On April 16th, tricked by a somewhat sunny day and fed up of waiting, I walked out the front door and down the road to the Glamorgan coastline where I joined the path.
I had done absolutely no planning before leaving, just dreaming. This was on purpose: I thought preparation would lessen the feeling of exploration but mainly I knew it wouldn’t be necessary.

And it wasn’t, the path around Wales doesn’t require endless route planning and a bag stuffed full with maps. A lot of money from the Welsh Government and a great deal of effort from volunteers has been put into the creation of this very young path. Markers line the entire way on trees, poles and lamposts, and in some towns mosaics and pointers are neatly embedded in the pavement. The only times I ever got lost would be when I was too deep in daydream.
Yet, I had time to get lost so it wasn’t a concern. I set myself absolutely no deadlines- not for the end of the journey or even the end of the day. This was allowed by the willingness to rough it. To pitch my tent in any corner I could find that was sheltered from the wind and from the view of potential angry farmers. So no hotel or Bed and Breakfast booking to reach by the evening, instead my own pitch where I could ensure I woke with a fantastic view to gaze at while I ate breakfast.
(Unfortunately it is illegal to wild camp in Wales so if you do choose to do it the naughty way, be respectful and leave the place as you found it).

‘The Church in the Sea’

The lack of constraints provided by wild camping means you are able to take in the sights. There are those that are ancient, such as  St Cwyfan’s ‘church in the sea’ on Anglesey island and the many castles- Beaumaris, Harlech, Caernarfon and Pembroke to name a few; wandering through their dark, damp corridors and picnicking on their grassy courtyards.
Then the not so ancient: The village of Portmeirion where you drift among colourful Italianate buildings and gardens whilst the mountains of Snowdonia loom in the distance and  then down in the south to Laugharne where in the shadow of a castle sits the little Boat House where Dylan Thomas found his inspiration staring out to the fishing boat bobbing sea. 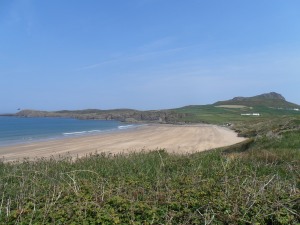 On top of these places, you can enjoy what Wales is best for- its scenery, particularly its beaches. Despite having been unable to wait until summer and enduring the coldest spring in 50 years, I was lured many times into jumping into the blue waters. Those beaches: Lligwy Bay (Anglesey), Whistling Sands (Lleyn Peninsula),Whitesands and Caerfai (Pembrokeshire) and the jewel in the crown, Rhossili (Gower), ranging from miles of yellow sand, barren and  unspoiled, to little coves where the  water is clear and calm, Mediterranean in look, but Arctic in feel.  Fortunately each beach usually came with a pub, where I was able to forget the cold with a few local ales.

If this kind of freedom and adventure appeals to you but you don’t have the time that I was so fortunate to have, there are stretches of the path around Wales that will give you the same experience of ‘getting out there’ but won’t force you to be missing for 9 weeks. The Wales Coast Path was assembled out of many long standing and well walked paths of varying length, meaning you can match a section to however amount of time you have available. These sections are the best parts of the route around Wales and have been trodden for decades. In contrast,  with the establishment of the Wales Coast Path, these old sections were hastily linked together with each other, often by paths alongside roads or on pavement. On the whole these linking paths are therefore not very nice to walk.
So if anything, by taking on these following established sections you get the best and avoid the worst.
I hope from this list you will be able to pick an adventure that suits you.

Very easy walking and offers possibly the best beaches of the entire path around Wales, with Rhossili, Oxwich and Three Cliffs Bay. Three stunning beaches that you can wander past all in one day

This was one of my favourite stretches of the walk. Some parts are challenging but it is overall a simple, almost circular path. Passing over the mountains to access the land that stretches out to the sea, you feel you are truly cut off from the rest of the world. This has resulted firstly in the preservation of Welsh culture, (you will hear mostly Welsh when you are there) and it has also meant that you will find some truly isolated beaches that only walkers can access. 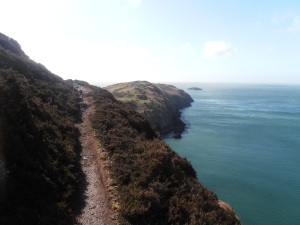 An already popular circular walk. You can leave a car somewhere or get up easily by train, then wander  off and enjoy the amazingly varied coastline; from the tranquil Menai Strait to the jagged cliffs of the north- then end back where you started.

13-14 days- Pembrokeshire
This has been a national trail for some time now. The fact it is the only coastal National Park in the UK says enough about its beauty. It is quite tough ‘up and down’ walking in parts and shops for restocking are harder to come by…lots and lots of pubs tucked into the charming coves though.

11-14 days- Offa’s Dyke
Another national trail and probably the hardest of all the sections. This takes you through wild Wales; over two mountain ranges and the Shropshire Hills, but has so much beauty, nature and history to be seen and lovely market towns every now and then to relax in.

So many people I met expressed their envy in my journey and the opportunity I had to do it. Their excuse was always time; that they wished they had done such a thing when they were younger- I hope I have demonstrated that all you need is a few days if you want a taste of that adventure! So get yourself a tent and get out there.